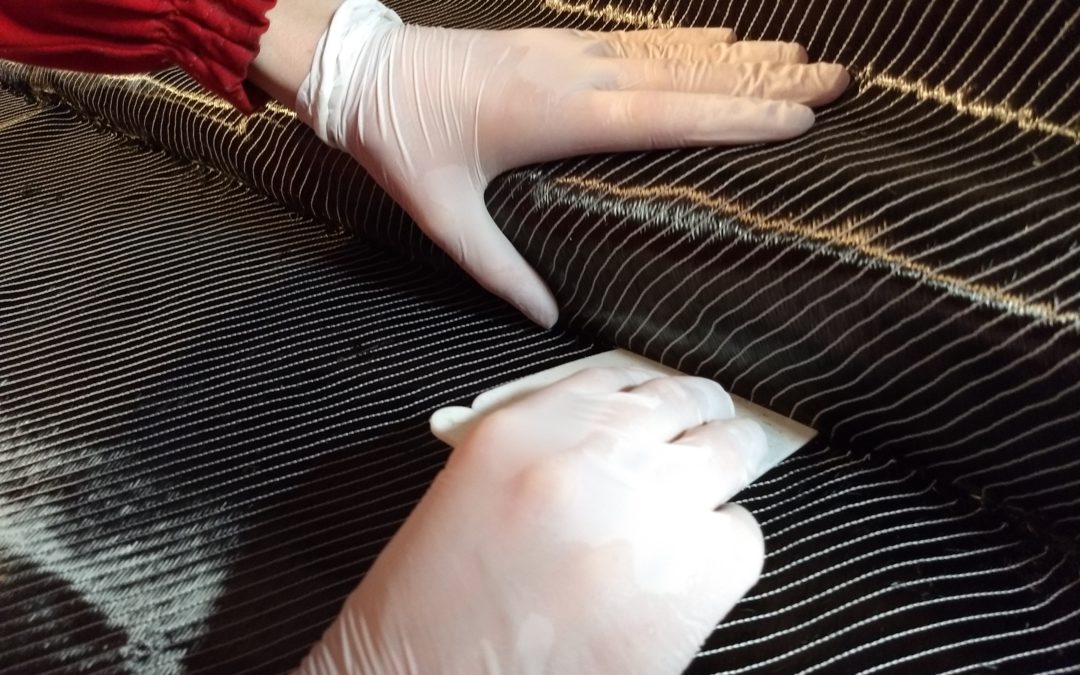 Today is Wisdom Wednesday. A bi-weekly item in which we put a spotlight on one of our technological innovations. This week we will tell you all about designing our ‘plug’ and the production phase. This process exists of two phases; first the making of the mould and secondly the carbon shell of the car. Curious how we do this? Our aerodynamics engineer Mariska will explain our view on developing a theoretical solar car and the road towards the actual production of the solar car.

The perfect solar car
For the aerodynamics engineers the design phase ends in January. This is what we call ‘The Aero Deadline’. This moment is also a point of reflection for the team; this is the best the aero design will ever look. Which might sound a bit depressing but with a good explanation; the aero shell (outside of the car) will also have to be manufactured. That is where things get tricky. We, the aerodynamics engineers, would love the back end of the car to end in a perfectly sharp edge, which is nearly impossible to realize. Fortunately, we have improved our manufacturing skills on this subject! Last edition, we even had to sand the edge of the rear of the car to prevent people from cutting themselves on it!

From model to plug
The first step in realizing the final shape of our solar car is the design and development of the plug. Manufacturing the car is not a one-step process. First, we make an exact replica of the positive shape of the upper and lower body of the car. This is what we call the ‘plug’. The plug is made from a very special and solid material, and even though this material can withstand some stress, we handle it very cautiously. Watches, belts, zippers and sharp wit are not allowed anywhere near the plug! The overalls we wear during the production phase are specially adapted for us, so no harm can come from them to our plug. Because every scratch we leave on the plug, leaves its mark on the mould and therefore results in a scratch on the solar car. The mould, a negative shape of the car, is made on the plug. Finally we will use this negative shape to create the final shape of the car, which we will retrieve from the mould just like a cake from its tin. 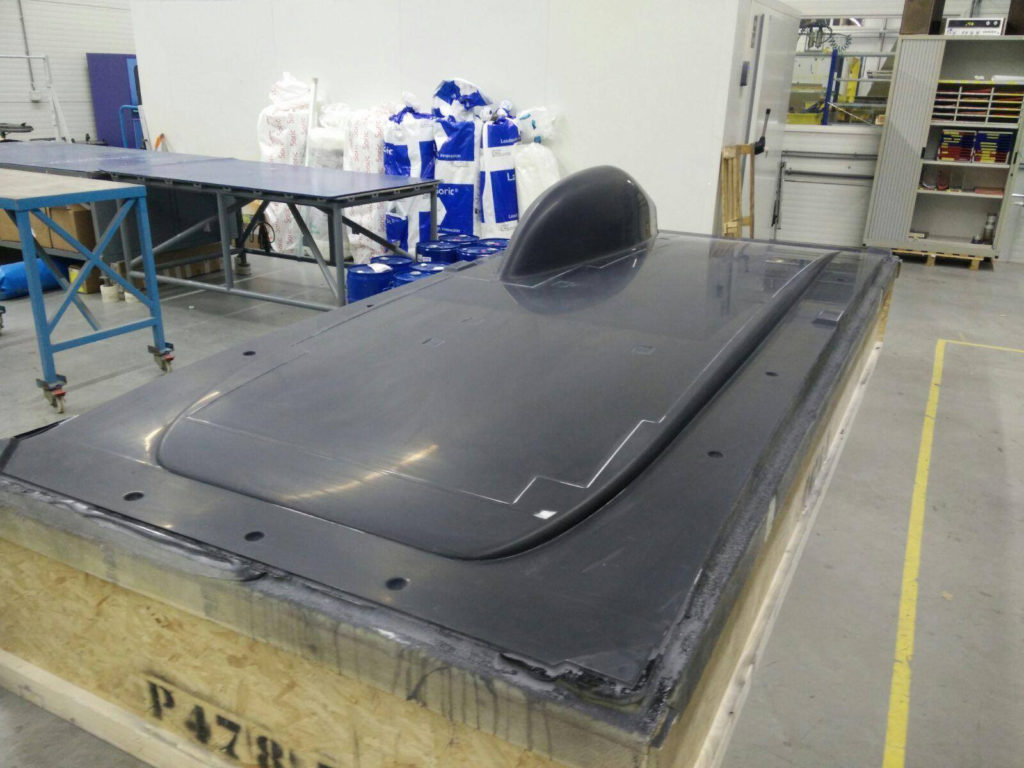 In the photo above you can see the upper body plug from 2017. This shows some interesting details, like reference lines for the placing of the solar array, for the canopy and for the indicator lights. These details were added to simplify the manufacturing process as much as possible. It will take a few months before these components will be integrated in the final car. Which is why the design of the plug requires a lot of planning effort and communication between all disciplines.

From designers to manufacturers
After roughly six months of designing and preparation the production phase starts. You trade the technical team office, a small but nice office space where all the technical team members reside during the project, for the workshop downstairs. Another change is our time at the office. Our daily work schedule goes from 8AM to 8PM, because a lot needs to be done during the production phase! Luckily we all agree that it’s all worth it and that is actually feels very satisfactory to see our design come to life. It takes some getting used to this new schedule but it soon feels natural; cleaning plugs, placing the carbon, placing the vacuum bag, infusing and repeat. You have to be very careful and precise to create the perfect mould. On the header photo you can see me placing the carbon around the canopy in such a way that it follows the shape of the car. The more precise this is done, the less can go wrong during the infusion.

Time to infuse
We create the mould through infusion. Which works as follows; you cover the plug with dry woven carbon fiber patches as precise as possible. Carbon is incredibly strong, but only in the direction in which the fibers are placed. To evenly distribute the forces which work on the carbon and to connect all of the patches we add epoxy. This is like a thick glue which hardens when it is used in the carbon patches. This creates a strong mould and provides for a nice and smooth surface to manufacture the car on. To evenly distribute the epoxy we build a vacuum chamber; the entire plug and dry carbon patches are wrapped in a special type of plastic. After this is done all of the air will be extracted with a vacuum pump. If this process doesn’t show any small air leakages the epoxy is added through a supply line into the package. 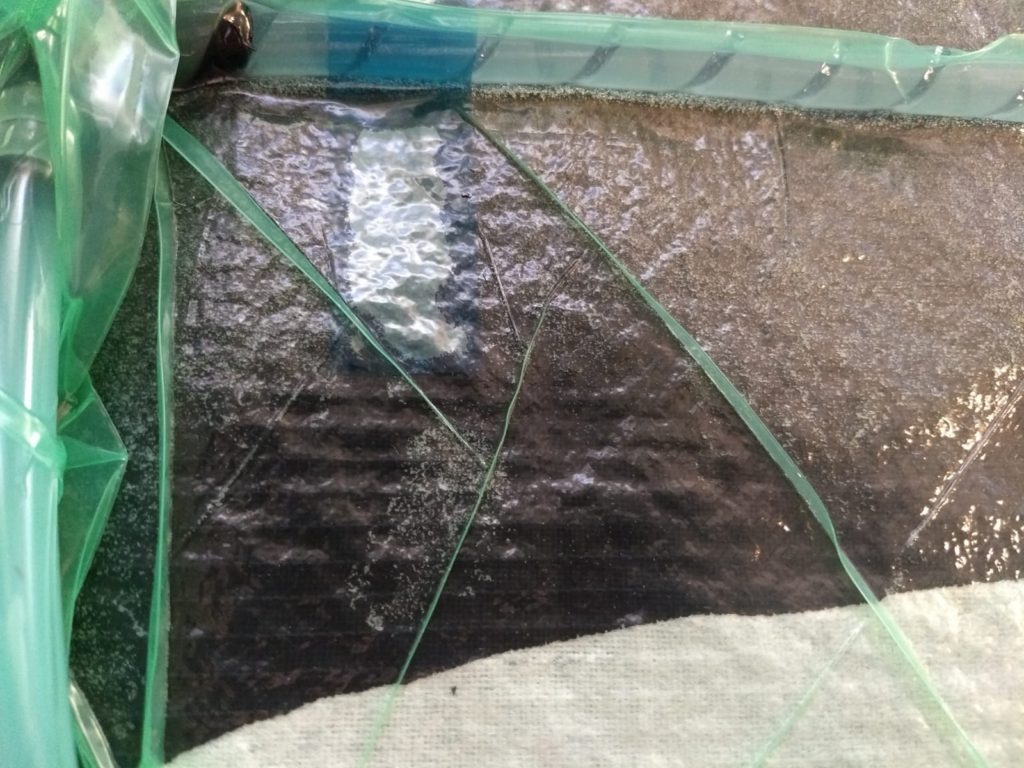 The photo above shows this process. Through the coiled pipe at the top draws in the epoxy and spreads it throughout the layers of carbon; the black layer is infused with epoxy, the white ridge below is still dry. Slowly but surely the whole plug turns black. When this is done you ‘bake’ the entire plug with mould in the oven to harden out the epoxy and achieve the correct thermal characteristics for the mould. This is how you make your mould!