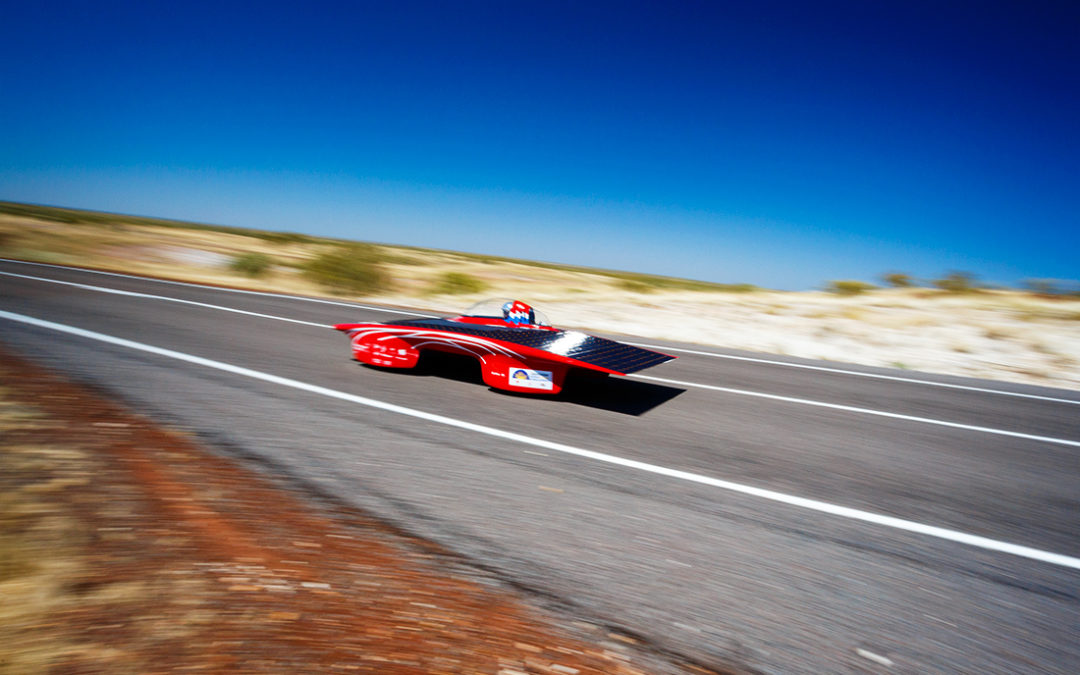 Today is wisdom Wednesday! The day where we enlighten you a little more on the technical aspects of our project and how we challenge the future of urban mobility with these technological innovations. This week: it forms the driving force of our car; the electric motor! Team member Jochem explains what is so special about our motor, and explains how it works!

The electric motor, the driving force within our car. A lot of people are surprised to hear that RED One (2015) has only one in-wheel motor. The reason for this is actually really simple: it means a lot less weight going in to the car. However this means that the car is only ‘powered’ on the right side of the car, but the car’s construction is rigid enough to withstand these forces.

More than just an electric motor

Solar Team Twente’s electric motor is not something you can just buy at a hardware store. It is designed and produced by Solar Team Twente together with several partners. Production partners (High Voltage Potting and Coating (HVPC) and Wikkelbedrijf Groenlo), knowledge partners (Tecnotion and Piak Electronic Design) and test partners (DEMCON and Rotor B.V.) are involved in the development of our motor.

A history lesson on the Solar Team Twente electric motor

2013 Marked the first year where we drove with our own motor which was equal in efficiency but lower in weight than the motors which were available on the market at that time. In 2015 they performed a radical mechanical redesign, saving them several kilos of weight. Besides the mechanical redesign, the motor was also improved electrically. In 2017 we continue this development, but the details of our redesign will remain a secret for now!

But, how does it work?

Just as there are different types of ‘regular’ motors, there are also different kinds of electric motors. However, most of them have a similar way of working. The first one is one we all know, magnetic polarization. When you place two magnets near each other they will either repel or attract each other, depending on the orientation of the two magnets. If you were to replace one of these magnets by an electromagnet (a magnet which only produces a magnetic field when a current is led through it), you can alternate the process of attracting and repelling of the magnets, this allows you to power an motor!

The other working principle is the Lorentz force, named after the Dutch physicist Hendrik Lorentz. This is a force which a charged particle, like an electron, experiences when it moves through a magnetic field. See the video for a demonstration of this force!

So, how do you develop your own motor?

Which things should you focus on when developing your own motor? The interesting, but also complex thing about the development of the motor, is that everything affects each other. Imagine you want to use a thicker copper wire in the motor to reduce the electrical resistance, this wire could easily be twice as heavy as the original, meaning you add extra weight to the car which requires a larger consumption of energy. That is why you have to discuss with the different disciplines if this is feasible. You would increase the efficiency of the motor, but it also adds weight which in the end might mean you’re off worse than with the original idea. Besides that it is not even sure if you would have enough space for these thicker wires without having to downsize the magnets within. That would result in a decrease of the magnetic field, which would have an effect on the performance of the motor. So every decision requires a lot of research and testing!

Do you also support the development of new innovative technologies and want to contribute to the development of the car of tomorrow? You can still do that this week! Go to www.solarteam.nl/adoptacell and quickly adopt your solar cell. With which you support us in showing the world the power of solar energy!