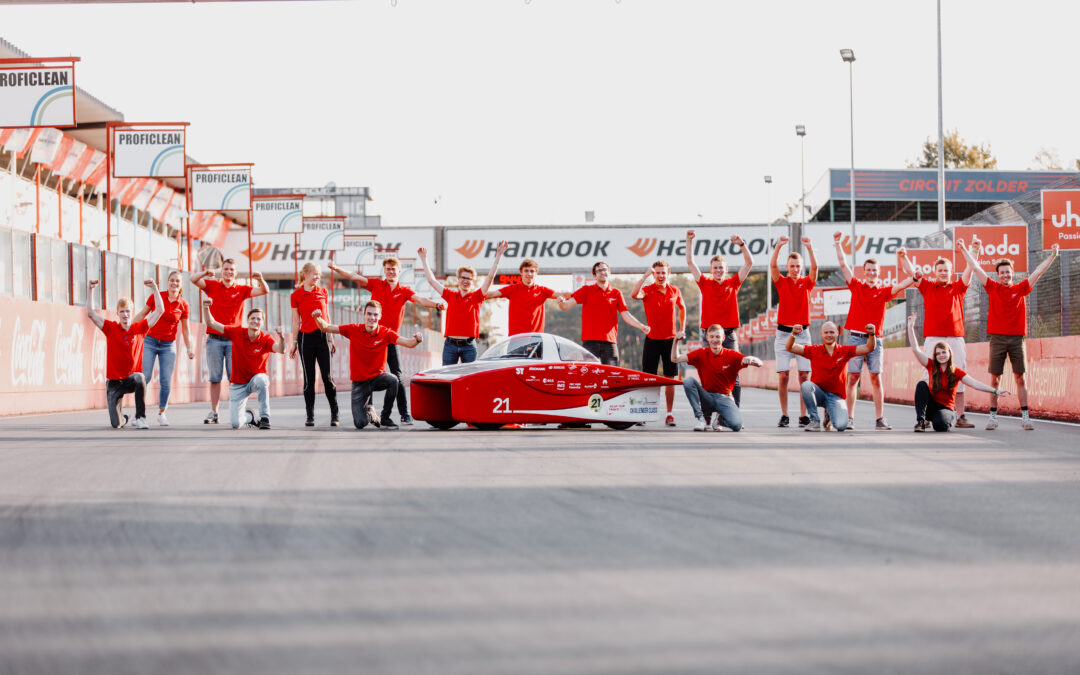 3 weeks after their official start, the new team from Solar Team Twente participated in the European Championships in Belgium. The 24-hour race was their first racing experience, and a preparation for the Bridgestone World Solar Challenge 2021 in Australia. The team placed 2nd and 3rd in the Le Mans-inspired race on Circuit Zolder. The gap to the world champion Agoria Solar Team from Leuven was too large to close.

Testing efficiency
The iLumen European Solar Challenge is a 24-hour race for solar cars. The race’s goal is driving as many laps as possible. Optimum efficiency is not only required from the car, but also from the team. The students from Saxion University of Applied Sciences and University of Twente took part with the team’s two most recent solar cars: RED Shift (2017) and RED E (2019). “We were immediately thrown into the deep end this weekend. We have only been together for a few weeks, so this was a great exercise for the new team” says team manager Colin van Laar. “It was also a great challenge because only a limited amount of experienced team members could join for support due to the COVID-19 measures.”

Comeback from the solar car RED E
For the first time, RED E is in action again since it was blown off the road by a gust of wind during the Bridgestone World Solar Challenge 2019. “We have been working hard on RED E’s recovery in the past months. The goal was to let the new team come into action with RED E during this race so that they get experience and know the car inside out” said Rob Kräwinkel, Electrical Engineer of solarteam 2019. “RED E and the team performed very well!”

Innovation is central
Next to the teambuilding, the innovation was central during the weekend. With RED Shift, the team was testing new electrical technologies which have been developed by Solar Team Twente since 2016. “The technology has proven itself this weekend. In addition to the great result, we have taken steps towards developing a more efficient electrical system” says Jan Lenssen, Electrical Engineer of the solarteam 2017.

The next challenge
The new Solar Team Twente will now fully focus on developing a new solar car for the Bridgestone World Solar Challenge which takes place in Australia in October 2021. The 3000 km race from Darwin to Adelaide is the most prestigious race for solar powered cars. Its regulations constantly challenge participating teams to keep innovating. The team from Twente has the mission to develop the most efficient solar car in the world. With this car and the team members’ passion, they want to show that they can contribute to making the mobility sector more sustainable in a short period of time. Solar Team Twente’s preparations in the run-up to the race in Australia can be followed on their social media and their website solarteam.nl.