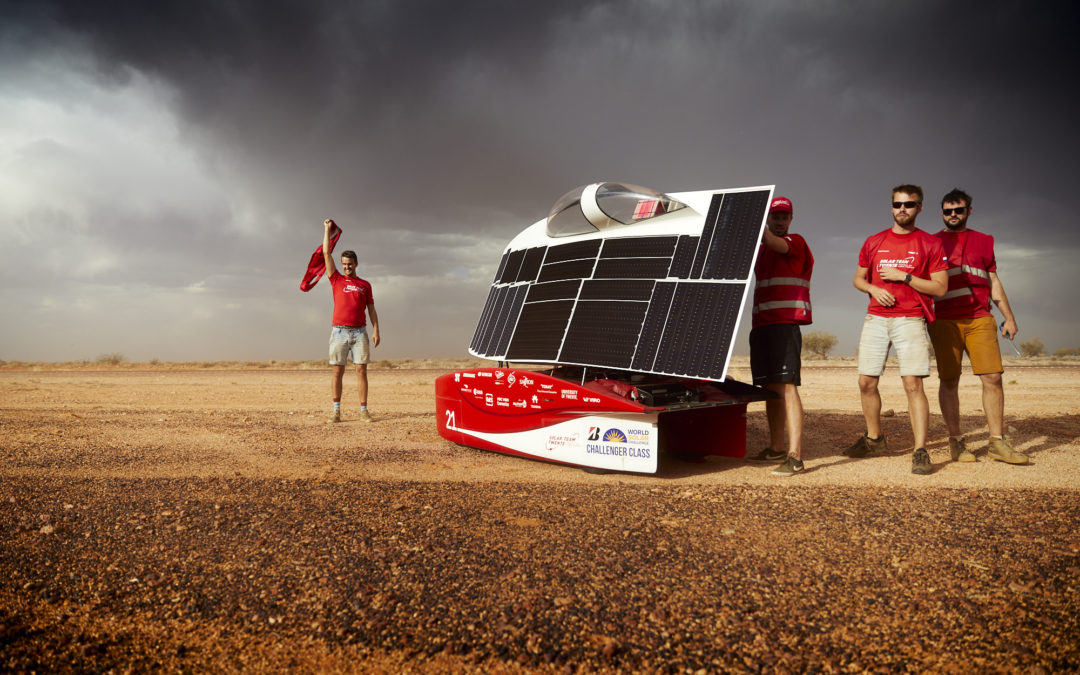 Solar Team Twente has retained its leading position on the third day of the Bridgestone World Solar Challenge. Some heavy winds and sandstorms caused some serious difficulties for the team but did not keep them from leading the race. The top three remains unchanged, although Vattenfall Solar Team came nearer to Solar Team Twente.

Extreme conditions
Severe winds and sandstorms hit the Australian outback during today’s stage, causing some serious difficulties for the team. Later in the afternoon, the conditions became so extreme that the team decided to park the Red E aside the road for safety reasons. Driver Hidde de Vries, who was driving during the afternoon: “That was quite a challenge. Safety comes first, so we decided not to continue. The visibility was poor and at times we were not able to see the other cars in the convoy. This is just pure bad luck: the storm was really local so it might well be that the other teams did not come across the same difficulties. We remain confident of a good result, although this was quite a challenge.”

Halfway
On the third race day, the team passed Alice Springs. The city is exactly halfway the route. While passing Alice Springs, Mariska Bos was behind the wheel in Red E: “After two days in the outback it was a great experience to be back in a populated area. On the one hand, it was hectic, there were a lot of traffic lights and quite a lot of traffic. But it was also good fun: a lot of people responded cheerfully and waved to us.” Later on the day, the team passed the border between the Northern Territory and South Australia.

Forced to stop
In the afternoon, the solar car of Solar Team Twente was forced to a short stop. A passing road train (Australian truck combo with three or more trailers) caused a lot of side wind, which led to the solar panel opening on one of the sides. To ensure the panel was safely locked again, the team had to stop for a short service. The support vehicle with the technicians arrived at the spot rapidly. They checked the lock and we were able to hit the road again within two minutes.

Details matter
The top three of the race remains the same after day three, with the Belgian Agoria Solar Team in third place, and Vattenfall Solar Team in the second spot. The teams are still within short distance of each other: after Solar Team Twente set up her camp at 5.00 p.m., Vattenfall Solar Team continued for a few more minutes to end their race day a little further on the track. The details will count and the teams keep a close eye out for each other. At the moment, Solar Team Twente is just 44 kilometers outside Coober Pedy. There is still 865 kilometers to go until the finish in Adelaide.

—
Note for press: for more information regarding Solar Team Twente, please contact Jochem Vreeman, our spokesperson in the Netherlands: +31 6 5432 6671.