Take a look at the convoy: the Escort 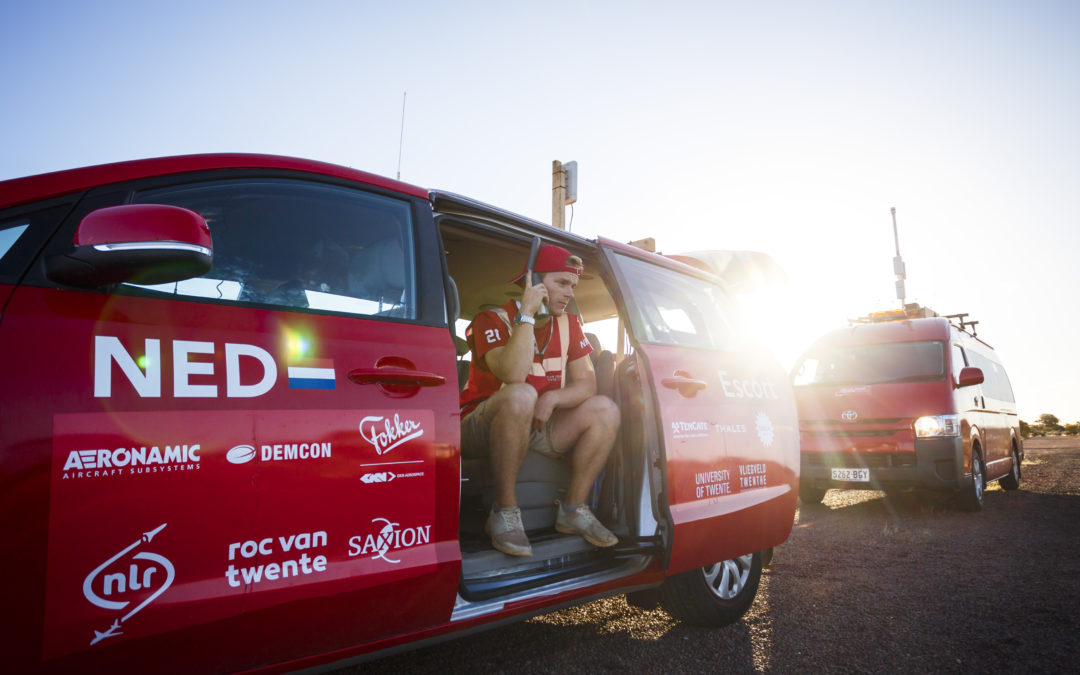 Our solar car RED E is not the only vehicle that crosses the Outback during the Bridgestone World Solar Challenge: an entire convoy with the 39 team members drives along with the solar car. In this blog series we explain how we cross the Outback with the entire team. Every car in the convoy has its own role. This week we tell you everything about the car who guides RED E through the Outback: the Escort.

The Escort, the DMU and RED E together form the racing convoy. The Escort drives in front of the solar car and guides it during the Bridgestone World Solar Challenge. For a smooth and perfect race, the communication and safety protocols are extremely important. These two come together in the Escort. You can read in this blog how this all works.

Communication during the race by the Escort

The team members driving in the Escort communicate not only with the racing convoy during the race but also with the other eight cars in the convoy. The communication goes via UHF CB radios and mobile radios. Because internet connections are often absent in the Outback, these communication lines are the only ones. Sending a whatsapp message or calling each other is simply not possible. To ensure the radio communication goes smoothly, communication protocols were made and well trained in advance by all team members. In this way, the information provision during the race goes as fast and clear as possible. To give an example, a request to overtake the racing convoy from the Media car goes as follows:

Safety first when RED E is not driving

In the unlikely and unwanted event that something happens to RED E comes and we must stop at the side of the road, it is very important to handle the situation safely. If the convoy is parked less than ten meters from the road, flaggers will be placed in front of and behind the stopping place. In this situation, the front flagger watches out for oncoming traffic, while the rear flagger watches the traffic from behind. The distances between the front and rear flagger can be very large. You can imagine that a large part of the convoy cars will be placed around the solar car. Using whistles, the flaggers communicate whether traffic is passing. Between the flaggers, several pawns are placed so that passing traffic clearly sees that they must pay attention. In addition, these pawns ensure that the service team (= the team that repairs the solar car) can carry out their work safely and undisturbed.

There are five team members sitting inside the Escort. One of them, Guido, is the driver. Sitting next to him is Jasper. Jasper is responsible for all the communication within the entire convoy. He has all the radios within reach. Jasper is also the Safety Officer, meaning that he will make sure that safety goes first when the racing convoy has come to a stop and that the safety protocols are well executed. One of the drivers of RED E sits at the back of the Escort, in case the driver who is driving RED E at that time cannot continue. Frances and Sybren are sitting next to the driver at the backseat of the Escort. Sybren makes notes of all traffic conditions during the Bridgestone World Solar Challenge. The Scout, the car in front of the Escort, passes all this information. All team members in the Escort will know where and when these situations, such as oncoming traffic or side roads, will be. When necessary, Jasper will communicate these situations to the other convoy cars. During control stops, Sybren is responsible for the safety of the solar car. Frances concludes the team members in the Escort. She keeps track of all happenings during the race, such as overtaking cars or other special situations. During control stops, Frances makes sure that the whole media crew knows what is going on. Besides this, she also writes press releases about the racing days.