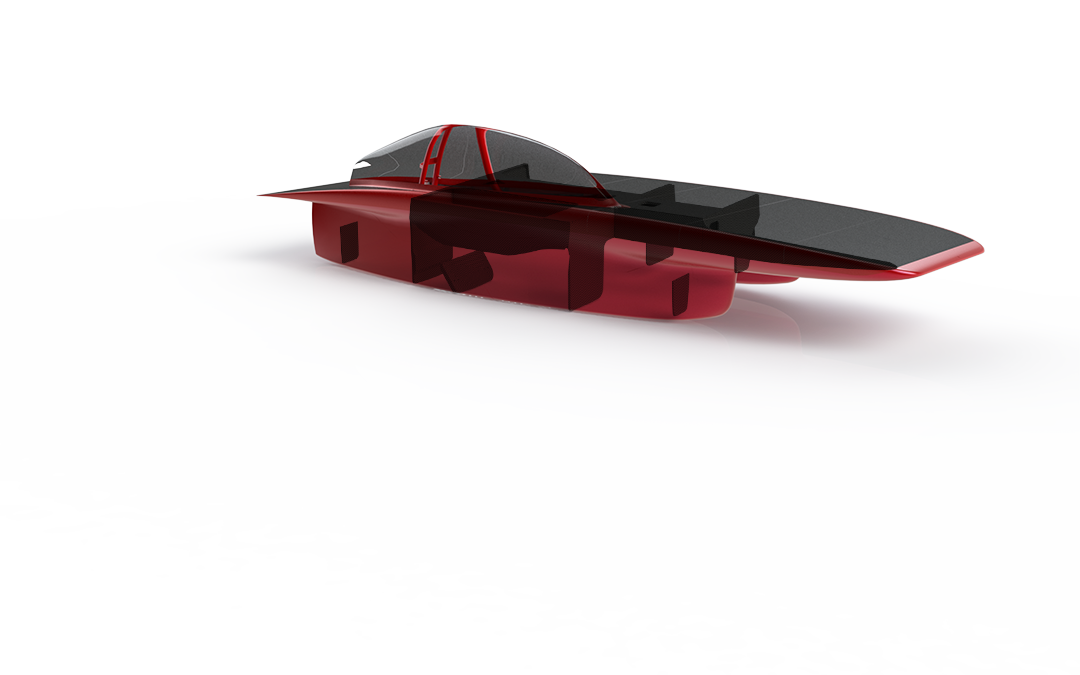 It is the first thing you see of RED Shift: the outside of the car called the shell. This shell is the optimal balance of everything that has to fit in the car and a car that is as aerodynamic as possible. The smaller, the better for the aerodynamics, but also the tighter the space will be where the suspension will be placed for example. When the shape of the shell is finally determined, its weight, strength and smoothness has to be taken into consideration. To tackle those problems, we use so-called prepregs, pre-impregnated carbon. This is carbon fiber that already contains exactly the right amount of resin and this material is both very light and very strong.

Using a computer model this all comes together beautifully, but how do you translate that to the real world? How do you make that shell? By using a mold. Our mold is actually just a very big baking mold that accurately follows the shape of the figurative cake, in this case the solar car, to the micrometer. When a few layers of prepregs are laid in it and baked, the end result is the shell. That sounds very easy, but, unfortunately, it isn’t, because during cooling down the mold and the shell shrink. The shell must also be very smooth. This means that you cannot just use any ‘baking mold’, but the ‘baking mold’ cannot shrink faster than the shell and it must also be very smooth. If the ‘baking mold’ shrinks more than the ‘cake’ during cooling down, the ‘cake’ would get stuck. To ensure a perfect mold, we made it ourselves, and also from carbon fiber. If everything goes according to plan then, you get the perfect ‘cake’: light, strong, smooth and extremely accurate.

When the shell is done, we definitely aren’t finished yet. The shell is namely very strong, but not yet stiff enough. Just like a tent isn’t of much use without tent poles. The ‘tent poles’, in this case, are the ribs that are placed inside the car. These ribs form the skeleton of the car. This skeleton is called the torsion box, its shape is comparable to a stretched out shoe box that is positioned along the length of the car. The torsion box, made up of ribs, gives both stiffness to the entire car and also mounting points for all components, so-called interfaces. An example of such an interface is where the suspension is mounted to the torsion box. The big challenge of this edition of the Bridgestone World Solar Challenge is that RED Shift is a lot narrower than her predecessors. The space that would therefore be lost, could not be gained from the suspension, so it all had to come from the torsion box. It now is only 30 cm wide (almost three times narrower than previous cars). But with a smaller torsion box, the higher forces that will act on the solar car, still have to be absorbed. Using a lot of calculations and simulations, the right spots were therefore locally strengthened and the ribs are strong and still very light.All in all, designing the structure of RED Shift is one massive task of finding the optimal balance throughout the entire car of weight, strength, stiffness and layout.

This entire process is very comparable to the (sports) car industry, where the shell is comparable to the bodywork and the torsion box to the chassis. For now, the big difference is the material being used, but in the future normal road cars will get more and more carbon fiber components when its production becomes cheaper and faster. Structurally seen, RED Shift may be a predecessor of your future road car.