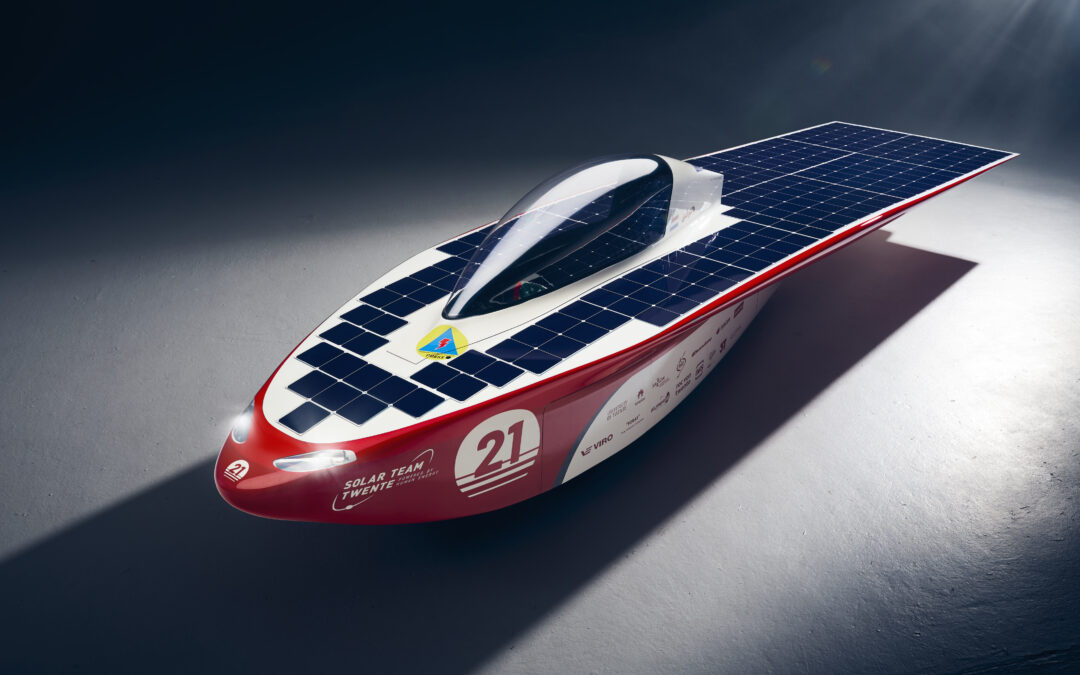 Solar Team Twente has unveiled their latest solar car in a spectacular live show in cinema Kinepolis Enschede: RED Horizon. Solar Team Twente is the only Dutch team to design the car according to a new, arrow-shaped concept with three wheels. The team thus opts for an optimal compromise between efficiency and stability. RED Horizon will appear at the start of Solar Challenge Morocco at the end of October; a completely new race for the team that brings new challenges.

Racing in the Sahara

To race in the Sahara, the team must overcome some major challenges. For example, the winding, hilly course means that there is more emphasis on the stability of the car, but especially on the power. “Solar cars are designed to drive as efficiently as possible at a constant speed. This requires relatively little power,” says electrical engineer Thijs Alberts. “But going up a mountain requires a lot more power, so we have adjusted our electric motor a lot.”

Solar Team Twente has been developing its own electric motors since 2013. As a result, the team has a lot of influence on the performance of the motors, so that they can be tuned to the desired performance and efficiency. In addition, the team wants to use their brand new, self-developed motor controller. “This considerably increases our chances of winning”, says Alberts.

In addition to electric motors, Solar Team Twente has also established a reputation with leading batteries. This year the team has not been idle to once again turn the battery into a secret weapon, although it was not easy. Because the car is so compact, there is little room for the battery. That is why the shape of the battery has been modified considerably, so that the available space has been used smartly. The battery management system, which the team has been developing itself since 2016, has also been further developed to ensure the safety of the battery. By building on the excellent battery of their previous car, Solar Team Twente hopes to be one step ahead of the competition. 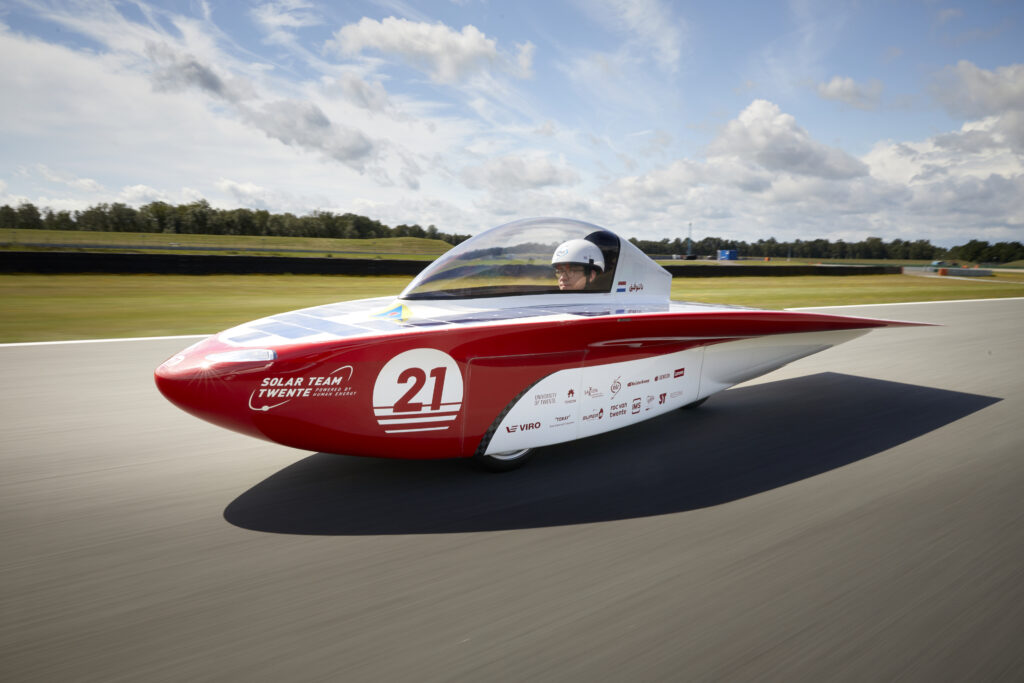 If you place RED Horizon next to its predecessors, you immediately notice that it is a unique and innovative solar car. “We saw an opportunity within the new regulations to completely move away from the kind of solar car that we have built in recent years,” says aerodynamics engineer Job Hofste. “After thorough research, it turned out that a three-wheel arrow shape was the best compromise.” Solar Team Twente is the only Dutch team that has opted for this progressive concept. However, in order to make the choice for this concept successful, hard work was needed to make the car as small as possible.

This was made more difficult by new solar panel regulations. While last year the team was allowed to use solar cells intended for space travel, this year the team had to return to more conventional cells. “These are less efficient, so we can use more of them to still generate enough energy,” says solar panel head Rick Groen. This makes the car considerably larger than its predecessor RED E. At almost 5 meters in length, the car is almost twice as long, but with a width of only 1 meter 20 and a height of 1 meter it is significantly narrower and lower. As a result, the car has a smaller frontal area, which offers major advantages for aerodynamics.

How the car compares to the competition will only be known at the end of October during Solar Challenge Morocco. “We will see solar cars in all shapes and sizes,” says Hofste. “But I am confident that we will be there as a strong team, with an even stronger car.” The race, like the development of RED Horizon, will be packed with unexpected circumstances and chaotic moments. More than ever before, the teammates will have to rely on each other blindly. But that confidence abounds. Solar Team Twente is looking forward to an exciting and legendary race with RED Horizon. 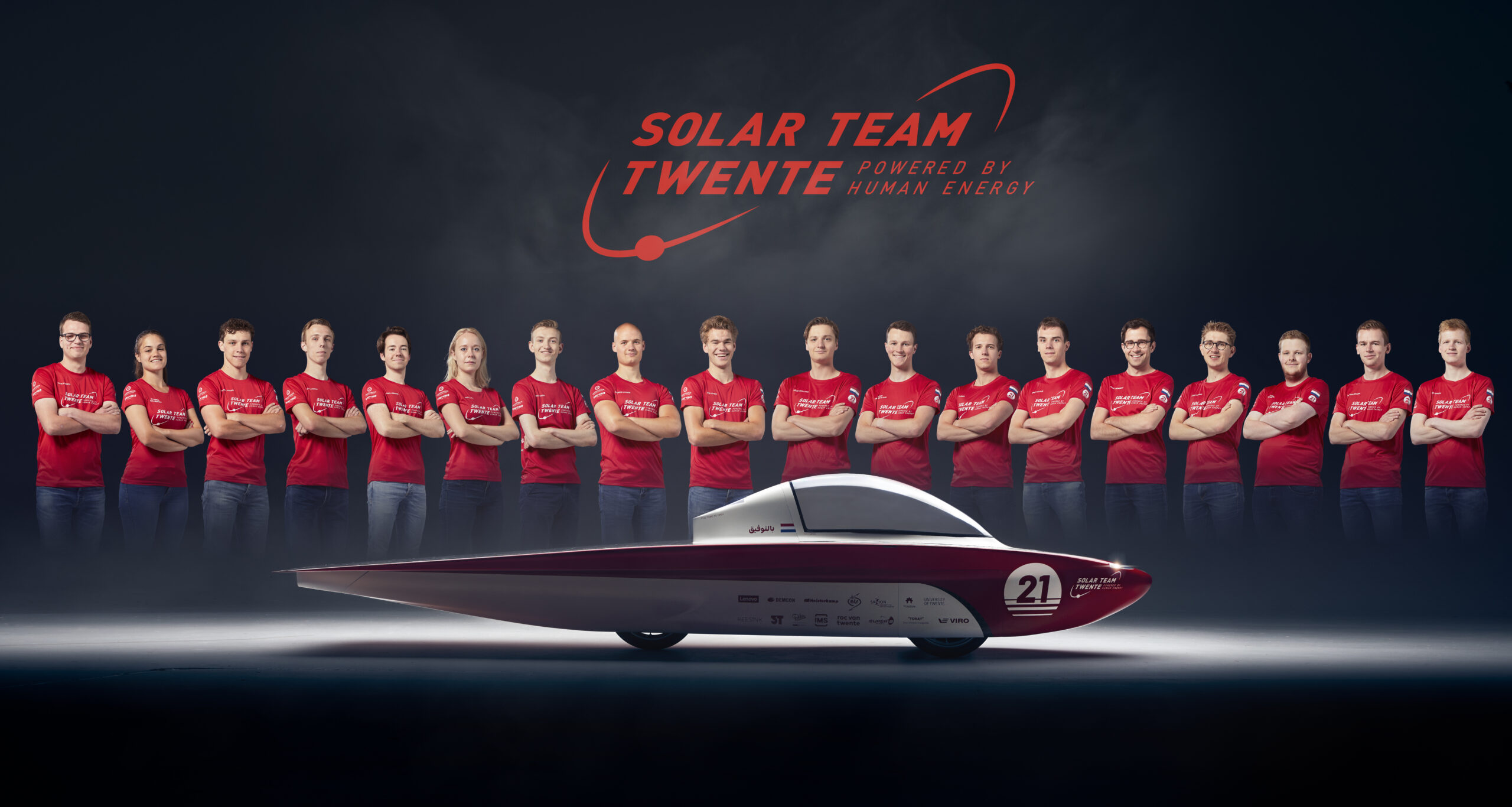