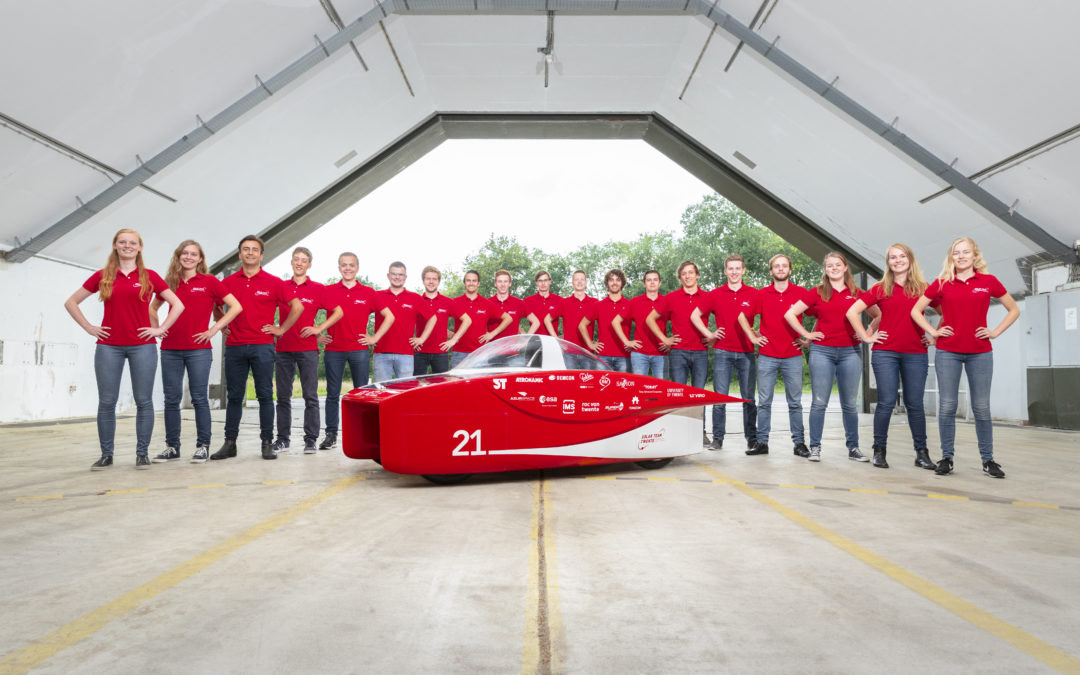 Today Solar Team Twente revealed their new solar car RED E in footballstadium De Grolsch Veste. With the new car the team is aiming for one of the top positions during the Bridgestone World Solar Challenge in october in Australia. The car is the smallest in Solar Team Twente history and with the nose of the car missing, it soon got the nickname ‘the kart’. In addition to the car presentation the team organized a network event where 30 companies and over 100 students from the region could meet. The team is once again taking on the role of reducing the ‘braindrain’ in Twente.

Voyage of discovery
During the car presentation Solar Team Twente took the audience on a journey, achieving the largest milestone for Solar Team Twente 2019 yet. Multiple team members shared their experiences of all the effort that was put in during the design and production phase of the car. “The moment we took the car out of the mold for the first time was very exciting: this is the first time we really got to experience how the car turned out and how small it actually got!” as Mariska Bos, one of the aerodynamicists, tells enthusiastically. “The size is actually very important from an aerodynamic standpoint. The air resistance of the finished car is comparable to a small can of coke.”

Reveal
After this small peak into the team, the RED E reveal followed. Drum band United Caribbean Rhythm Machine (UCRM) presented a spectacular drum show with the actual reveal being the climax. “During the reveal everything and everyone comes together: the team, the car, the partners and all the support. We stood proudly on the podium with the team, because we were finally able to show what we all worked so hard for” explains Sybren Wubs, technical manager of the team. “The road up to this point wasn’t always easy. Especially the planning was very tensive: will we get the car at the painter on time; do we have enough technical team members to assemble the car; will all the parts arrive on time? Luckily everything turned out fine and we could proudly present the eight solar car from Solar Team Twente!”

Museum
In an interactive museum the visitors could learn more about the new solar car. In the mechanical area some experiments were done with carbon and the air resistance of the car was explained. In the electrotechnical corner you could see what the car looks like from the inside and how it is possible to drive on solar energy. “By making comparisons to regular household electronics, visitors could gain insight in how the car works, the museum was a very good way to do so. A fun comparison is for example, while driving 80 km/h the car uses less energy than a toaster” explains Rob Kräwinkel, electrical engineer, proudly.

RED E: high tech
Just like previous edition, the car is once again an innovative feat. RED E is a lot smaller than the previous car, this is driven by the switch to GaAs solar cells. This type of cell is usually used in the aerospace industry. Instead of 4m2 for silicon cells, only 2.64m2 of solar array can be used of the GaAs cell type. This is very noticeable in the length of the car, basically the nose from the previous car is missing. In pure size this saves about 1.5m2.All components had to get a lot smaller and placed more efficient to still be able to fit in the car. A great example for this is the wheel suspension, it is based on the suspension systems used in Formula E.

Collaboration for innovation
The electrical engineers have also not been slacking. Solar Team Twente will for the first time in history drive with their in house developed Motor Control Unit (MCU). The MCU is the part in the car that is responsible for powering the motor. The development of this MCU was started last edition in collaboration with partner 3T and engineered to a final product. A long term collaboration was started and it resulted in a beautiful innovation, applicable in the industry and our solar car.

Fully Charged
Before the car presentation Solar Team Twente organized the event Fully Charged, once again fulfilling its role in bridging the gap between students and regional companies. Team manager Annelies Dekker: “A lot of our partners are from the Twente region and have a hard time gathering graduated students. Solar Team Twente aims to improve the relation between young talent like ourselves and the partners and companies from the region. During Fully Charged the goal was to have the students meet companies and get them to know each other, this resulted in great experiences. More than 30 companies got in contact with over 100 students of which over 75 students partook in workshops and speed dates organized by the companies.”