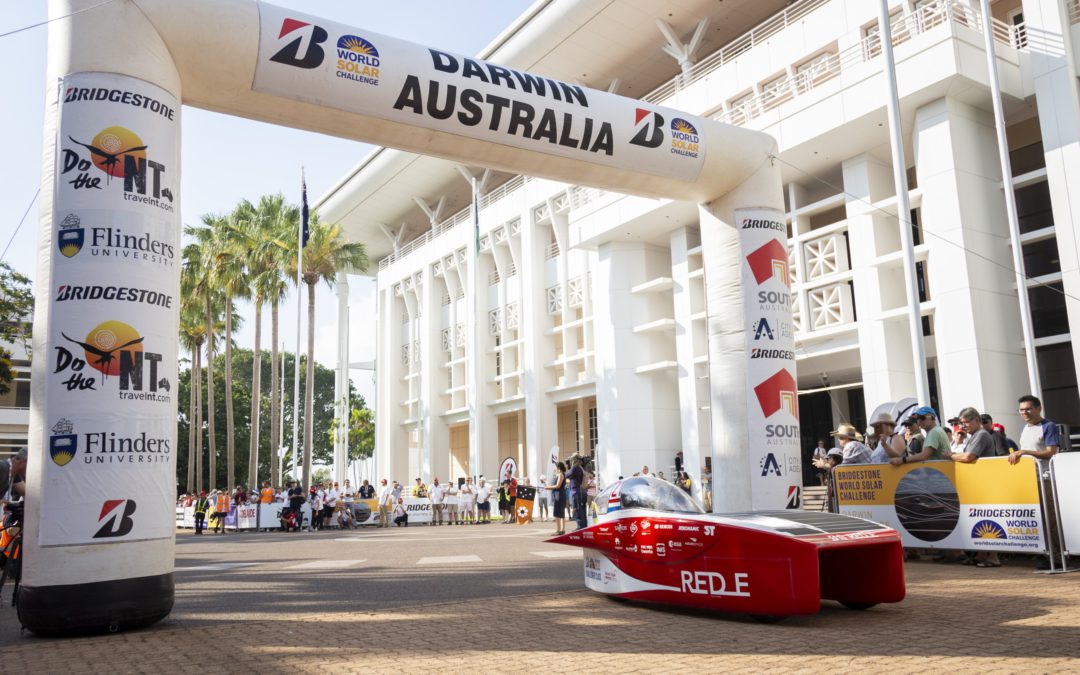 Take on the Dutch
After the first day the top three teams are all Dutch, with in third place Top Dutch Solar Racing from Groningen, in second place Vattenfal Solar Team from Delft and Solar Team Twente in first place. The solarteam from Twente was the fifth to start after the yesterdays qualification, but within minutes after starting their journey the team managed to overtake the first two teams. “The first overtakes were a textbook example of how they should go,” according to driver Hidde de Vries. “At that time we were still in the city perimeter and the differences between the teams were very little. After another twenty minutes we overtook our colleagues from Groningen who were the first to start today.”

Head of the race
Agoria Solar Team from Belgium took the lead soon after the start of the race. After one hour Solar Team Twente closed in on them. “Overtaking Agoria Solar Team was very exciting but just as stressful,” tells Hidde. “During the overtake a road train passed in the opposite direction. Road trains are trucks with up to four trailers. You can feel them pass by pretty good in the small solar car. So I had to pay close attention to both overtaking the competitors as on the passing road training. After the overtake was successful, the feeling when I realised that we took the first position was amazing.”

Bush fires
The rest of the day went quite successful. The sun was shining brightly during the first race day and the solarteam from Twente maintained its first position. The team encountered a few little bushfires. “Until now we did not experience any discomfort from the forest fires. I expect that all vehicles in the convoy will pass by the fires and that these fires will not have any influence on the progress of the race” said race leader Annelies Dekker.

Bridgestone World Solar Challenge
On 13 October Solar Team Twente will appear at the start of the Bridgestone World Solar Challenge, the most prestigious race for solar powered cars. Together with more than forty other international participants, the solar team from Twente will travel more than 3,000 kilometres through the outback of Australia with the RED E solar car. The race has three different classes. Solar Team Twente competes in the Challenger Class, the Formula 1 for solar cars. Solar Team Twente can be followed live during the race on social media.

Note for editors
For more information you can contact Olivier Berghuis, spokesperson Solar Team Twente 2017, +31 6 50876645 or via o.berghuis@solarteam.nl.