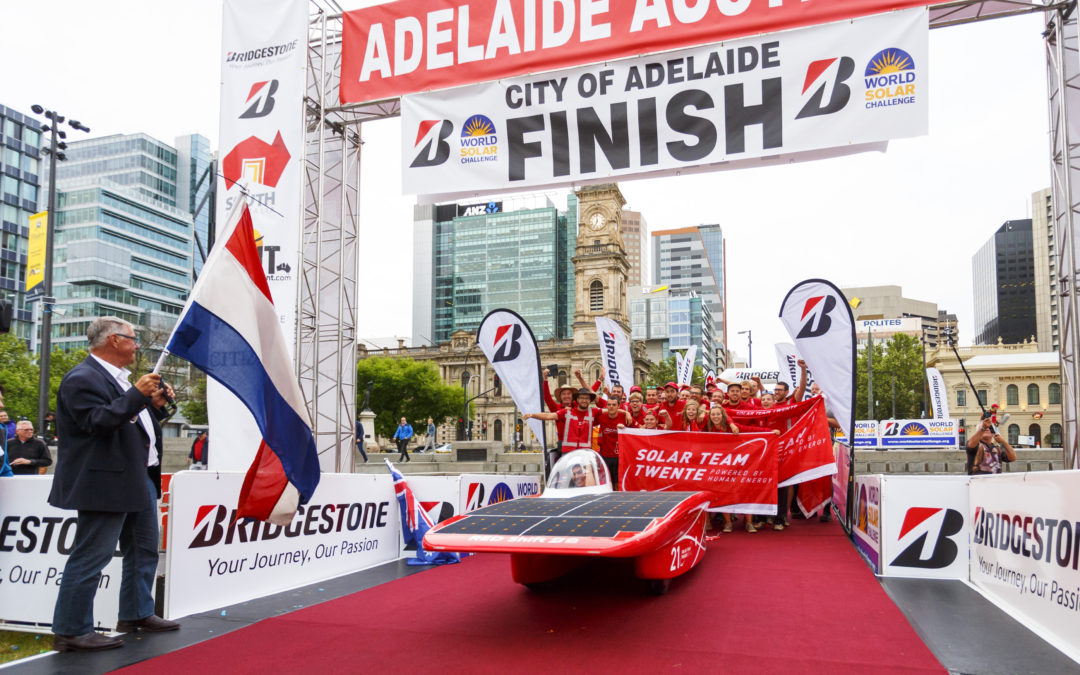 After five days of racing, Solar Team Twente crossed the finish line in the Australian outback in fifth place. The team is very proud of their achievements in this spectacular race. They only just made the finish line today, arriving in Adelaide’s busy city centre with only four minutes to spare.

The Twente team’s race was very turbulent. “RED Shift truly lived up to its name, shaking up and rearranging the rankings in the race. We started playing catch up from day 1 and we left sixteen other teams biting the dust that day. After that, an intense battle ensued among the top five teams”, explains team leader Olivier Berghuis. “I’m proud of our team, but, unfortunately, crossing the finish as the world champion was not meant to be. We definitely showed the world what we are made of and that we belong at the top, though! Of course we would like to congratulate Delft University of Technology on their impressive victory.

Today was D-day for the student team. “From the second-to-last stop we had four teams left to overtake. That was when we really pushed RED Shift to the limit. It was great to see the team spirit come alive again, one last time”, explains Mr Berghuis. “We were able to cross the finish line just before the end of the day, with only four minutes to spare.”

For Solar Team Twente, Bridgestone World Solar Challenge was not without setbacks. On the last day, for example, the team was given a 30-minute time penalty. In spite of this penalty, the team was only 18 minutes behind team number 3.

The team is very proud of their performance. “We have had setbacks and are proud of our achievements. We started in 20th place and crossed the finish in 5th place. We were able to beat over 25 teams. This proves that we have built a fantastic solar-powered car. We’ve definitely stretched the limits of technology and of our team members,” says the team leader.

Solar Team Twente consists of nineteen students from Saxion and the University of Twente. They pursue their dreams: winning the Bridgestone World Solar Race in October 2017. In addition to the students, Solar Team Twente has a strong network of innovative partners.

You can find images on our Flickr-account (please mention the photographer).