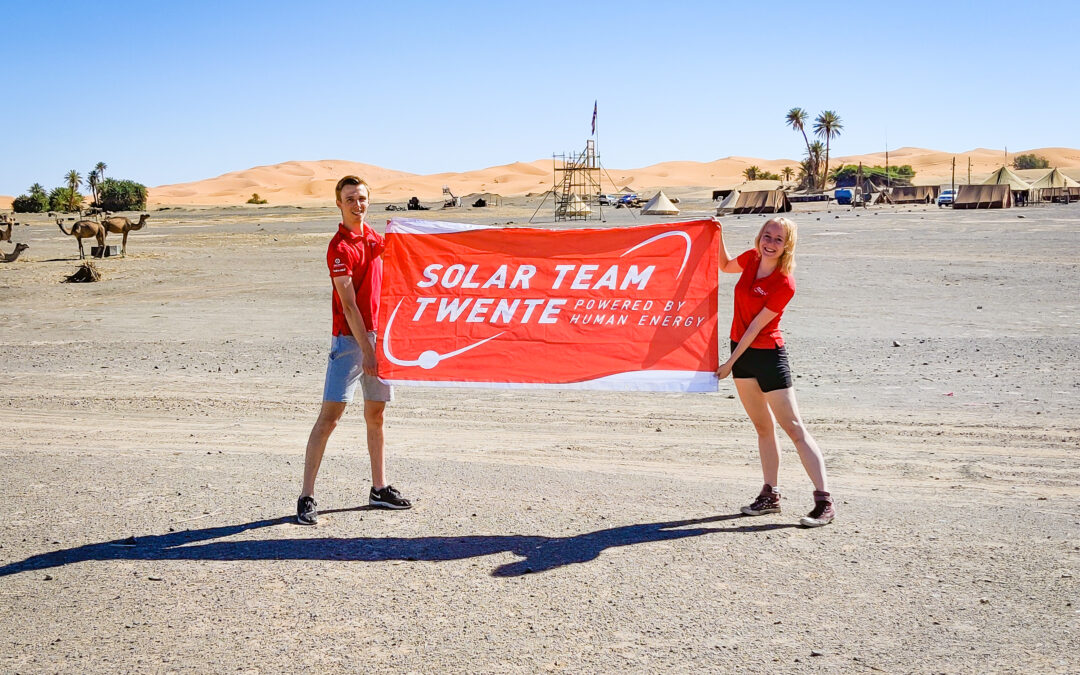 Solar Team Twente has explored the route of the upcoming race through the Sahara in Morocco. By researching the route and the environment early on, the team will be well prepared at the start of their race in four months’ time. Judith Tel (strategy) and Oebele Lijzenga (data acquisition) share the findings that should help the team to victory. Tel: “We learned a lot from this reconnaissance trip. There is a big difference with Australia and this course provides many new challenges. A definite pro is the quality of the roads, which is better than expected.”

What exactly did you do in Morocco?

Tel: “Basically, we have completed the race route, as it is known for now. While driving, we then investigated various matters, such as the height profile of the route, the quality of the road surface, but also, for example, the range on our mobile phones.”

And you were there with two others?

Why did you bring a former team member with you?

Tel: “Marijn has experience with racing in Australia because he participated in the World Solar Challenge there in 2019. So he can let his experience speak for itself and indicate exactly in which ways the race in Morocco will be different from the race in Australia.”

And what did you learn most from him?

Tel: “That we have to be a lot more flexible in our approach. Due to the characteristics of the route, the race will become a bit more unpredictable. That means we have to be prepared for all possible situations, so we have to be flexible and quickly switch strategies.”

Lijzenga: “We will probably also have to make some adjustments to the racing convoy. To support the solar car, convoy cars always drive in front and behind. On winding, tight mountain roads, that can sometimes present challenges.”

Before the start of each race, Solar Team Twente makes a similar exploration, a so-called ‘trip-up’. It is important to map out changes in the environment compared to previous years, in order to be prepared for the race. As early as June, the team has never undertaken a trip-up, until now.

Why are you making a trip-up so early this year?

Lijzenga: “Normally we can rely on a book of data and strategies from previous years for the World Solar Challenge. Since we have never raced in Morocco, we will have to collect all this data ourselves. If we are on time with that, we still have enough time to make adjustments to our organization and to our strategy.”

Tel: “Thanks to this trip-up, we can better estimate which speeds we can achieve in which corners, and that appears to differ from our earlier estimates that we made with data from the internet.”

How do you collect that data?

Lijzenga: “We have different ways of measuring elevation profiles and elevation data. We also have a dashcam that provides an overview of the road. Furthermore, it is a lot to look at the quality of the asphalt.”

Tel: “We also mapped out the speed expectations and speed limits for different parts of the route. We also noted the characteristics of the bends. We also pay attention to traffic, the crowds in villages, traffic lights, animals along the road, you name it.”

What struck you most about it?

Lijzenga: “What struck us is that the quality of the roads is quite good. There is almost no Google Street View in Morocco, so it was difficult to estimate what the roads would be like, especially outside the big cities. However, the verge next to the road is often rough, so you don’t really want to park the car on the verge for repairs.”

Tel: “We also tried in some ways to pretend we were driving the solar car, but that is quite difficult. The driving characteristics of a solar car are very different from those of a normal car, so we mainly focused on collecting data that we can interpret independently of the solar car.”

Oebele, you also looked at the range on your mobile phone in the desert, why are you doing that?

Lijzenga: “We need good internet for real-time communication over longer distances. In addition, we also need the internet for weather data and the connection with the Netherlands, for example for the media team.

What were your findings about the internet there?

Lijzenga: “Where we have to rely mainly on satellite internet in Australia, 4G is much more available in Morocco. It’s worth figuring out where the range is best. For some things the range in Morocco is more than fine, for other things it is just not suitable. It is good that we now have a better idea of ​​the quality of the connection here, so that we can adjust certain things in our approach accordingly.”

In the Netherlands, Solar Team Twente is busy finishing RED Horizon, the brand new solar car that will be used in the Solar Challenge Morocco. In addition, the race team is also set up, in which each team member is given a specific task during the race. Judith and Oebele’s experiences will be passed on to the rest of the team upon their return to the Netherlands.

What will you tell the team first?

Lijzenga: “That we will put more emphasis on team building. This trip-up doesn’t change the fact that we’ve never raced in Morocco. So we will have to be prepared for very changeable situations and that means we have to be able to rely on each other more than ever.”

Tel: “The training of the drivers is also becoming a bit more important. On twisty roads in the scorching heat, you need to stay focused and know what the car’s limit is. So we will also train some extra on this.”

How are you going to prepare the drivers for this?

Lijzenga: “We are going to test the car in various places, and also look for situations where the roads resemble those in Morocco. In addition, we will also look for driver training from outside and see if we can build a race simulator so that we can also practice digitally.”

Do any adjustments need to be made to the car?

Tel: “No, that’s not necessary. When we knew we were going to Morocco, we already made a few adjustments. The data we have now collected will not change that.”

RED Horizon will be unveiled on July 16, 2021. After that, it takes more than 3 months to prepare for the race, which will be held in the last week of October.

Did this get you excited about the race?

Phone: “Absolutely. The new destination brings with it many uncertainties, but when you drive through Morocco and you consider that you will be racing a solar car there, you get excited.”

Lijzenga: “Yes. It’s going to be a lot of work and it certainly won’t be easy, but I’m looking forward to it. Morocco is a super beautiful country, so it will be a super nice race anyway!”