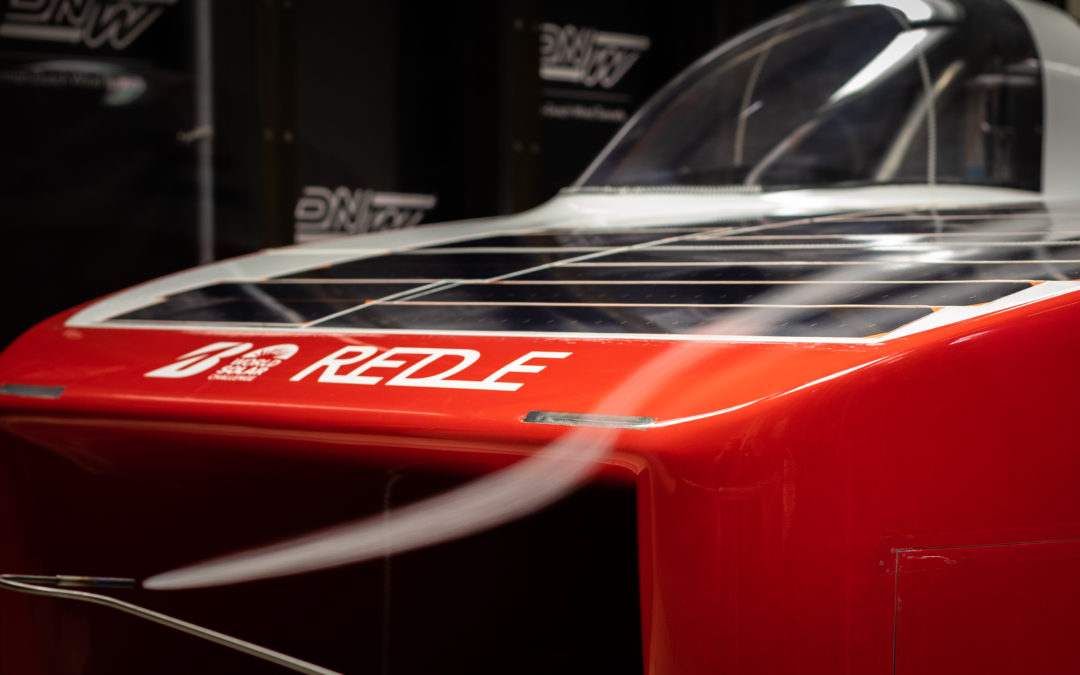 On Wednesday the 31st of July and Thursday the 1st of August Solar Team Twente tested the aerodynamic features of the new solar car RED E, in the wind tunnel of the German-Dutch Wind Tunnels (DNW) in Marknesse. The results are surprisingly good, as they also were with the previous solar car. The air resistance of the RED E is similar to that of a soda can.

Air resistance of a soda can
During the presentation of the newest solar car, Solar Team Twente already predicted that the air resistance would be similar to that of a can of coke. And that prediction proved to be accurate. The solar car even undergoes less resistance than the RED Shift that raced in the previous edition of the Bridgestone World Solar Challenge. For the greater part this is a result of the compact shape of the solar car. The choice for gallium arsenide solar cells paid off. Thanks to these cells, mainly used in space travel, RED E is the smallest solar car of Solar Team Twente. The size of the car has a big positive effect on the aerodynamics.

Into the wind tunnel
Inside the wind tunnel students of both Saxion University of Applied Sciences and the University of Twente, tested the air resistance the solar car gets to go through. Mariska Bos explains how this works: “We put the car on a scale that can very precisely measure the power in all directions. Next we test the car under different wind speeds. We are interested in these powers, because they help us predict how much energy it will cost to travel in certain speeds during the Bridgestone World Solar Challenge in Australia. RED Shift was also tested in the wind tunnel, so the results could be measured and compared und the same circumstances. 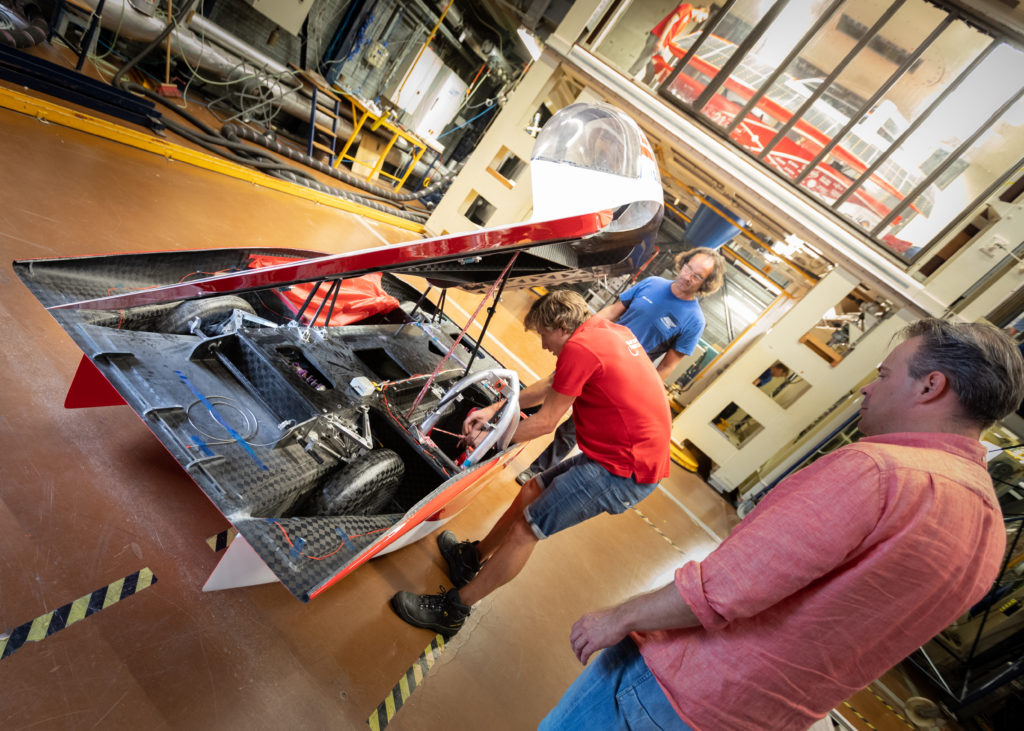 Smallest solar car of Twente
RED E is the smallest and most compact solar car of Solar Team Twente. Because it’s so small, it’s able to go into the wind tunnel itself. This was first done during the previous edition with RED Shift solar car. By testing the car in the wind tunnel itself the results could be measured much more precise. Earlier this would always be done by using a scale model. A scale model often misses details like partial lines, small changes in the shape of imperfections in the production process, a sealant edge on the canopy and the solar panel. All these details affect the air resistance. “The measured aerodynamic features in the wind tunnel hand us a performance model of the car. That model is the ground lair for the race strategy”, Hans Maseland of Royal Dutch Air and Space Center (NLR) tells us. NLR helps the students with the aerodynamic design and building the construction. “The leading thought during the design process is that the aerodynamic characteristics of the new car should be at least 2% better than that of your competition. That way you have a chance to win.”

One hour per kilometer
The aerodynamicists worked more than 3000 hours on the design of the solar car, which is similar to the amount of kilometers the team has to travel during the Bridgestone World Solar Challenge. “From time to time it was a difficult process”, says Mariska. “Anything is possible. There are a lot of possibilities to change and improve the design. Luckily we got a lot of help from former team members and from Hans Maseland of the NLR. They helped us with the interpretation of the results, made sure we didn’t forget anything and helped us solve problems. 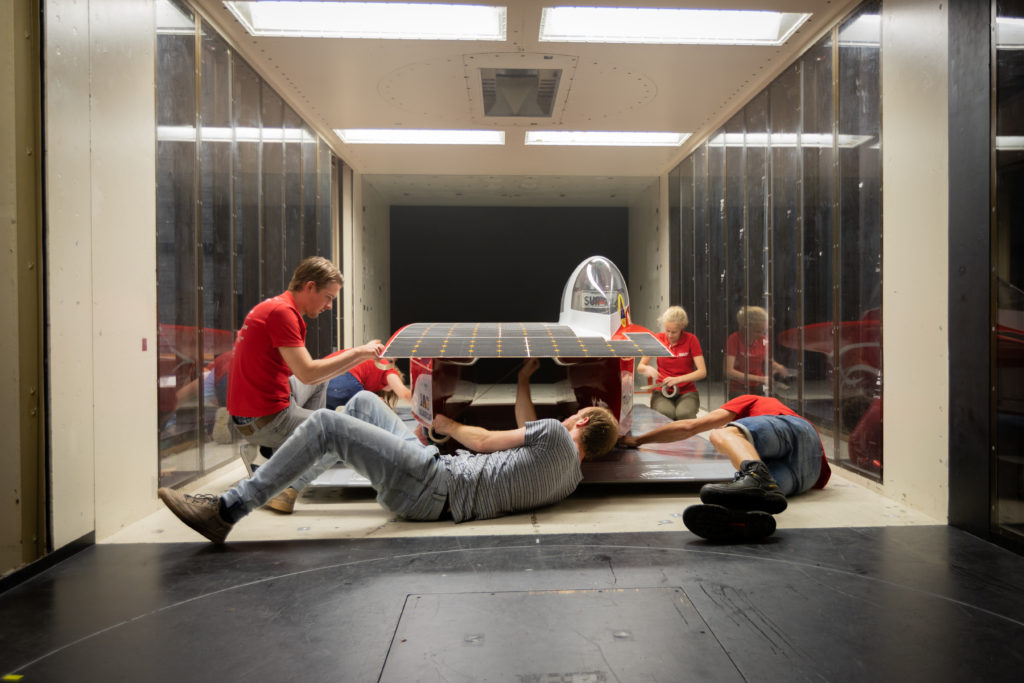 Bridgestone World Solar Challenge
On the 13th of October the Solar Team Twente will appear at the start of the Bridgestone World Solar Challenge, the most prestigious race for solar powered cars. Together with more than fifty other international participants, the solar team from Twente will travel for more than 3000 kilometers through the outback of Australia with the RED E solar car. The race has three different classes. Solar Team Twente competes in the Challenger Class, the Formula 1 for solar cars.

Solar Team Twente
Solar Team Twente consists of 19 students of Saxion and the University of Twente. Besides the students the team is part of a strong network of more than 150 partners. Together the team practices top-class sport and they build the most efficient solar car in the world. The team believes in the motto “Challenge triggers innovation”. That’s why Solar Team Twente competes in the Bridgestone World Solar Challenge. On the one hand to win the race and on the other hand to raise awareness for the possibilities of solar energy.