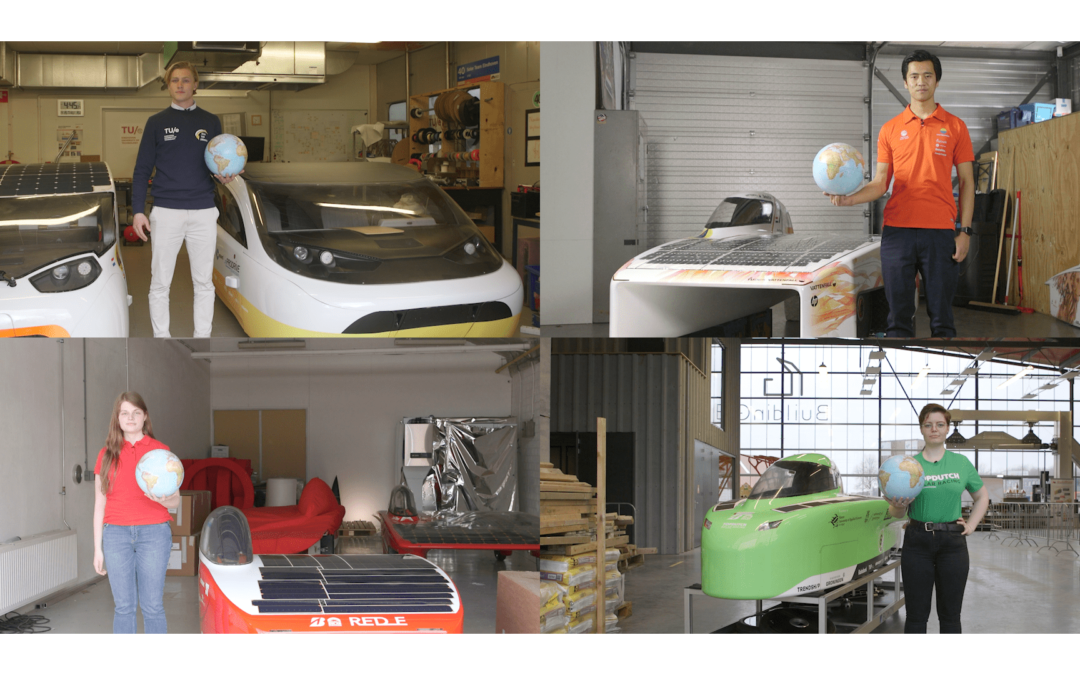 The solar teams from Delft, Eindhoven, Groningen and Enschede are joining forces for climate activism. The student teams build their own solar cars and develop technologies for a more sustainable future, but at the same time see that climate change remains a major problem. More than 25 percent of CO2 emissions in the EU are caused by the transport sector. The teams are pushing for a shift towards more sustainable technologies and activism. They are running the campaign with the motto: “There is no competition in climate change”.

Sustainability is central to the four solar teams. For a year and a half, the teams try to build the most efficient solar car possible. During this process, innovations take place that contribute to green technology. The main goals of the teams are to develop sustainable technologies and train young engineers. The Bridgestone World Solar Challenge in Australia, the World Championship for solar cars, offers the teams the opportunity to demonstrate their progress and improvements. However, after learning about the cancellation of this year’s race, the teams were determined to find alternatives to showcase their hard work. This gave the four Dutch teams the idea to collaborate to shine a light on climate change in a joint video. “One thing is certain: we are very competitive, but when it comes to climate change, there is no competition,” the teams explain.

Renewable energy as a standard

We are currently at a turning point in climate change. In the 2030 climate target, the EU sets ambitious goals to combat climate change, but according to the students, more needs to be done to achieve these goals. Achieving these goals is of great importance for future generations. Our actions have consequences for young people, both in the Netherlands and the rest of the world. Therefore, it is now or never. Everyone can contribute to a more sustainable world. It became clear to the solar teams that solar-powered cars can have a positive impact, as 25% of all CO2 emissions in the EU come from the transport sector. But there is also room for improvement. “We dream of a future in which sustainable energy is the norm, not the exception,” says Marlen Braun of Solar Team Twente. The four teams are calling on those around them to take action to become aware of climate change and make changes now, not five years from now when it may be too late.

Impact of the solar teams

The solar teams have been very successful over the years. A good example of a spin-off from the solar teams is ‘Lightyear One’, an electric car with solar panels that will be made available to consumers. Many of the more than 200 former team members went on to work in the green energy sector after graduation or started their own company, such as Lightyear. The talent development has paid off: the teams developed innovative aerodynamic designs, the efficiency of the electronics has improved year after year and is among the best in the world. “We are the generation that has to take action,” says Jamie Jankowsky of Top Dutch Solar Racing from Groningen. The teams demonstrate just that with their daily activities. Now is the time for the government and businesses to follow suit. Like the teams, the world must be united in its fight against climate change, and everyone must do their part.

About the solar teams

The solar teams consist of students from Delft. Eindhoven, Groningen and Enschede. A team usually consists of 15 to 30 students who use a year and a half of their study time to participate in this project. The main goal of the solar teams is to build the most efficient solar car, for which high-quality technology and innovative solutions are of great importance. Every two years the teams compete in a 3000-kilometre race to show what they have to offer. Where Groningen, Enschede and Delft focus on speed and maximum efficiency, Eindhoven focuses on cars that can accommodate several passengers and are aimed at comfort. What connects them is their passion for efficient vehicles and sustainability.