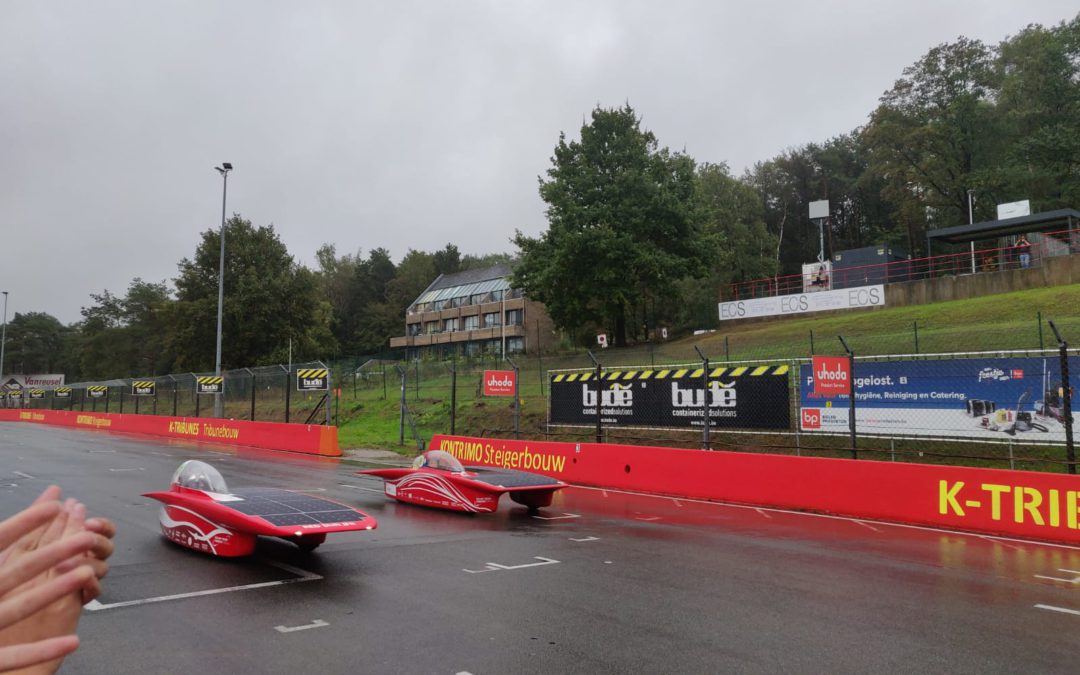 A whopping double victory was the result for Solar Team Twente this weekend at the iLumen European Solar Challenge (iESC), the European Championships for solar cars. This year, Twente’s solar team performed with two cars at the challenge: RED Shift and RED One. After 24 hours of racing in drizzly conditions at the Circuit of Zolder in Belgium, the team finished with two cars on the podium: RED Shift was crowned European Champion, with RED One just one step lower

The 24-hour race is considered the most important part of the iESC. This race has been an exciting one for the Twente Solar Team. Although the main goal of participating at Zolder has been team building, the team members were still eager to extend their reign as European Champions. Two years ago, RED One took the title. Both cars were in second and third position for large part of the race, right behind Megalux Hungary. After exactly twelve hours of driving, both cars managed to overtake their Hungarian rivals.

The conditions at Zolder were far from perfect. Especially the sight of the drivers was limited during the dark night. And as a result of heavy rain showers, the road was wet and therefore very slippery. That resulted in a lot of solar cars struggling with getting a proper grip. “Because of the hard rain, there were huge puddles of water on the road. The solar car is not designed for that. In the first corner, the car already started to spin, Luckily, that resulted in a 360 degrees spin so we were able to continue our race smoothly”, Mariska Bos, driver of the RED Shift, explains.

That both cars were able to deal with the harsh conditions, was mainly a result of powerful teamwork. It remained unpredictable till the very end which team was able to finish first, RED One or RED Shift. Both teams were in the lead during parts of the race.

The European Solar Challenge is a race organized by iLumen. The event took place at the Circuit Zolder in Belgium. With 22 participating teams, it is the second largest largest competitive race for solar cars. Notable is the fact that teams have to ride for 24 hours nonstop, with only two possibilities for recharging the batteries. This is what distinguishes the race from other Solar Challenges.

Solar Team Twente consists of twenty student members of Saxion University of Applied Sciences and the University of Twente. In October 2019, the students will take part in the Bridgestone World Solar Challenges, with the ambitious goal of bringing the title to Enschede. The Solar Team Twente is supported by a strong network of innovative partners. Together, they are performing top sport in building world’s fastest solar car.