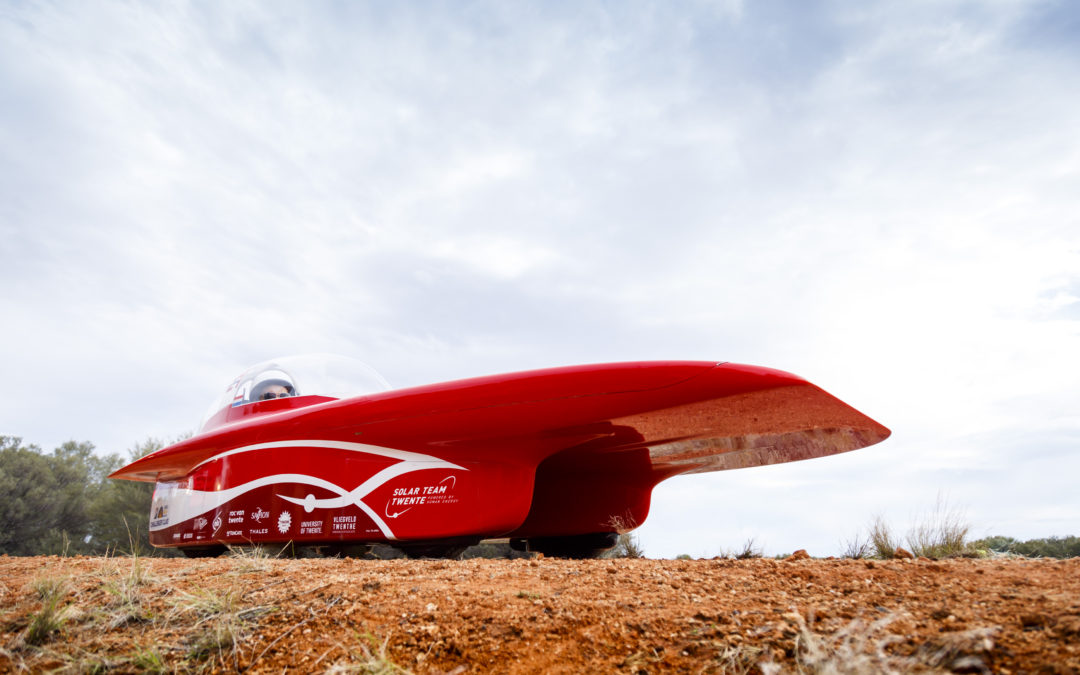 Solar Team Twente dropped one position in the rankings on day four of the Bridgestone World Solar Challenge. Just before the end of the day the Team from Twente was overtaken by Punch Powertrain Solar Team from Belgium. Then Solar Team Twente received more bad news after they finished: tomorrow they have to sit out a thirty minute time penalty. ‘This is a major disappointment because the differences in time between the teams are so small right now.’

At the start of the day Solar Team Twente struggled with a strong side wind which caused additional resistance, so the team decided to reduce speed to prevent too much energy being used. Luckily there was no rain during the race and the weather cleared up during the day. The team started in third position and was able to hang on to this position for almost the entire day. At the end of the race day Punch Powertrain Solar Team managed to catch up. Solar Team Twente finished race day four in fourth place, just a few minutes behind the Belgian team.

After the camp was set up, Solar Team Twente received bad news: the organisation had decided to impose a time penalty. The team will now have to wait for an extra thirty minutes at the first control stop. Team leader Olivier Berghuis is incredibly disappointed. ‘A thirty-minute time penalty is an enormous setback, especially now that the differences are so small.’ The team is livid about the reasoning behind the imposition of the time penalty and believe that they did nothing wrong.

Solar Team Twente was given a time penalty for the use of a white cloth underneath the solar car. During the technical inspection the team asked the organisers if they were allowed to place the car on a white cloth during stops and they were given the go-ahead to do so. Then the teams were suddenly informed that the use of the white cloth was not permitted, after which Solar Team Twente stopped using the cloth. The team was given the time penalty based on imagery of the first racing day, even though they had permission at that time. The appeal that the team submitted to the organisers was  dismissed after a few days.

Berghuis explains that the time penalty is bitter but he remains positive. ‘We will have to accept it for now. There is nothing we can do about it at this point and we need to move on. We have to make the best of a bad situation and we’ll use the extra thirty minutes to charge our panels and go on full steam ahead!’