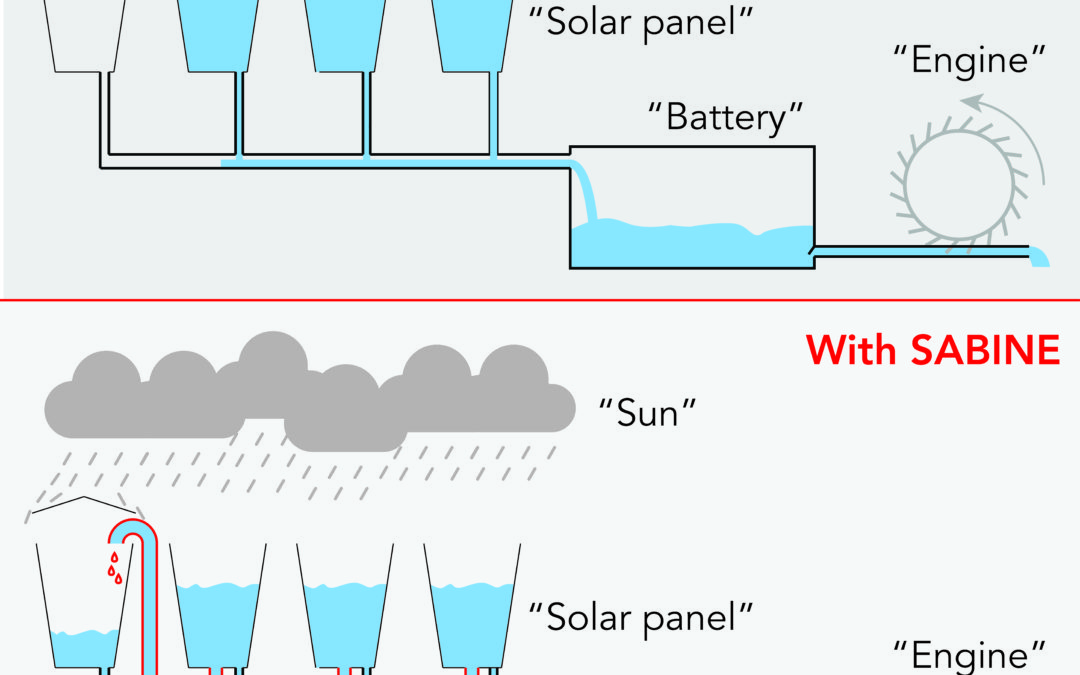 Do you remember SABINE? This year we reinvented her and she got even better than before. SABINE 2.0 was born. SABINE 2.0 monitors the voltage and current of small solar cell groups on the larger 4m2 array. This year SABINE 2.0 comes with a visual data acquisition interface for array monitoring. It is best compared to a heat map of the array, indicating which groups of cells are generating power. This monitoring allows us to immediately identify any defects or unusualities in the array modules, even when SABINE 2.0 isn’t switched on. It also allows us to monitor a variety of other effects, such as canopy shadow intensity, the impact of the curvature of the array and the effect of any dust and dirt present on the array. Monitoring this last aspect will allow us to make decisions regarding the cleaning of the solar array, which is also applicable in industry settings at large solar farms.

Since SABINE 2.0 can easily be adjusted to monitor entire solar farms, it can also be used to monitor dust and dust on any arrays, which can then be cleaned accordingly. It is also cheap to implement. Of course the monitoring can also be used to measure the correct functioning of SABINE 2.0. It can then generate feedback for SABINE 2.0 so that it can improve the balancing of the array and the tracking of the maximum power
points of the small groups of cells while in operation. The data can also be used to optimize the overall design of the SABINE 2.0 power converters and it can also be used to validate our theoretical models of our solar array. This information can then also be used to improve future solar array modules. After the succes of Sabine 1.0 (Solar Array Balancing Interface Not Expected) we are now introducing: Sabine 2.0 (Solar Array Balancing Interface New Edition) SABINE 2.0 uses partial power processing to track multiple maximum power points in a single string of solar cells, while using a single large converter that processes the full power of the array. This improves the overall system efficiency, because larger power converters can generally be designed to be more efficient and the smaller (slightly less efficient) converters only process a small amount of the array power keeping the weighted average of the converter efficiencies high while improving maximum power point tracking efficiency of the entire array.

This year, SABINE 2.0 will be using GAN (Gallium Nitride) fets for lower switching losses and improved efficiency. The power converter topology is also altered with respect to SABINE 1.0, which was using an isolated bus topology where every isolated converter had the same hardware and was controlled the same way. SABINE 2.0 is using a combination of different distributed converter topologies. To balance groups of cells bidirectional bus converters are used, sending power from the bus to the weaker groups, or from the stronger groups to the bus. The bus described here are the upper and lower connections of a single PV module. Using this combination of different converters overall power processing by SABINE 2.0 is reduced. Also, with individual control of converters better balancing of the array and better tracking of the maximum power points can be achieved. In combination with the array monitoring system, which supplies SABINE 2.0 with system feedback, the balancing of the array and the tracking of the maximum power points can be improved even more. Finally, every converter is optimized using the data from a theoretical model, after which a second design iteration is done using the data from the array monitoring system during the characterization of the array. For years now, and especially after the singing of the Paris Agreement last year, solar power has quickly become cheaper and more accessible to civilians. This also means that solar cells are currently being evaluated for placement on curved surfaces (i.e. airplanes, cars, boats, curved buildings etc.). For applications such as these SABINE 2.0 can greatly increase the efficiencies of solar arrays and therefore drive the price down even further. For civilians, SABINE 2.0 can also be implemented to minimize the effects of shadows on the array, which are highly likely to reduce the efficiency of solar arrays in urban environments.