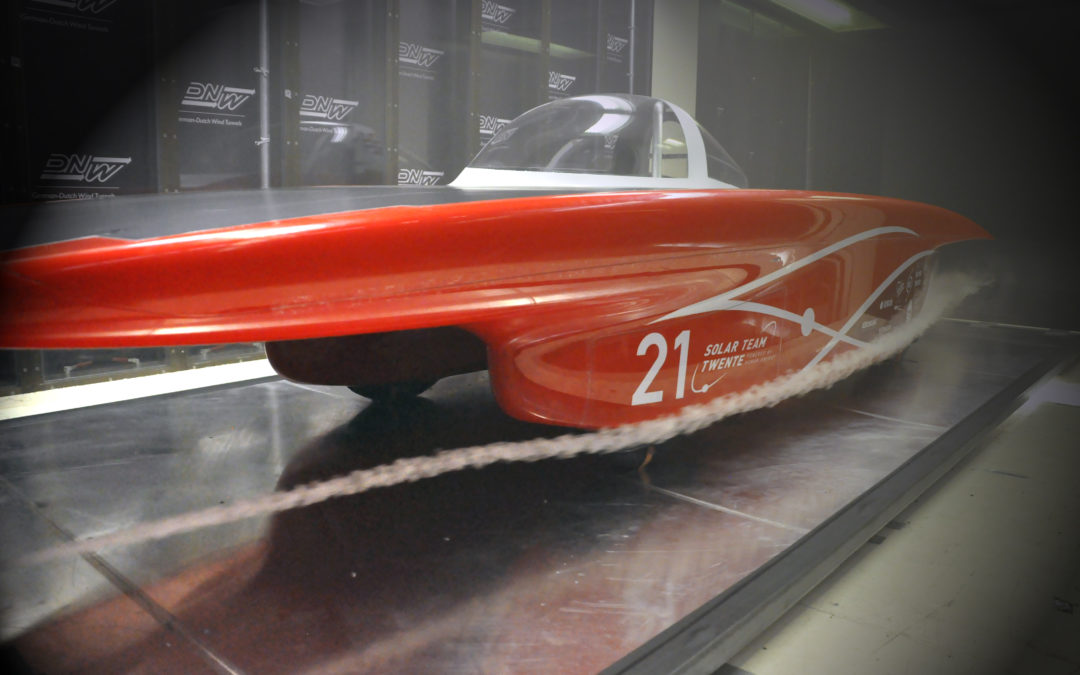 Designing the outside of RED Shift is the responsibility of the aerodynamicists. They have to optimize the design for as little air resistance as possible, but also make sure that all mechanical and electrical components fit inside and that the energy income from the sun is maximized. But how do you achieve that?

To immediately answer the title: aerodynamics is definitely not a bunch of hot air. 90% of the energy loss of a solar car at cruising speed is due to air resistance. This makes the aerodynamics of RED Shift the most important factor in reducing the energy that is lost. The aerodynamicists of Solar Team Twente therefore strive for the perfect aerodynamic shell (outside of the car). But which shape will it be? A droplet shape would be the best, but is sadly not realistic, because the aerodynamicists also have to take the rest of the car into account; a solar panel has to be fitted, the car needs four wheels and a driver has to fit inside. Adding onto that are the new regulations this year that dictate that the car needs to be smaller, because the total allowed size of the solar panel is decreased.

All concepts are computed through computer simulations. A car is drawn and then computed by putting it in a sort of digital wind tunnel. This way the air resistance of each concept is determined. When the definitive concept is chosen, a lot is not set in stone yet; every spot is drawn and computed again and again until the optimal air flow is created. This process is called ‘iterating’ and per iteration they look for further spots that can be improved. After half a year of drawing and computing the definitive shell is created.

The shell is made up of so-called ‘airfoils’. They are a kind of mathematical model that describes a shape like the cross-section of the wing of an airplane. This shape is in its principle just a stretched out and deformed droplet, because that is still the most aerodynamic shape. You can find these airfoils all over our car: the ‘main foil’ (the horizontal plate where the solar panel is placed on) is, you guessed it, an airfoil. Both wheel covers are also wings laying on their side. Even the canopy (the bubble where the driver sits in) is based on an airfoil, even though that might be harder to recognise due to the transition between the wings needing to be as smooth as possible.

Wrinkles and the transition

When the wings of the car are designed, it is important to get the transitions between them as smooth and gradual as possible to prevent the air from colliding against it. Because when the air collides with something, the air resistance increases. That is why you can see extremely rounded corners on RED Shift at the transitions to the wheel covers and the canopy.

Another, seemingly small, detail are the split lines. These split lines are in fact the lines where the different components can be separated from each other. For example the solar panel has to be aimed at the sun at a control stop and the wheel covers must be able to be opened for a possible wheel change. The ‘cracks’ of these split lines must be as small and smooth as possible to prevent ripples in the air. Every wrinkle is undesirable, because it disturbs the air and therefore worsens the aerodynamics of the car. This also applies to normal road cars. If you were to tape all the cracks and holes of your car shut (think about the cracks at the hood and doors, but also the grille), the fuel consumption of your car would improve! This is also the reason why electrical cars often have a closed grille. (With a combustion engine an open grille is often necessary to provide enough air flow to the engine). But, just as with a normal car, you do want to be able to enter and exit the car, so it is impossible to tape everything shut. That is why the split lines have to be as tight as possible.

So the aerodynamicists have to master the art of wrapping the car in a very aerodynamic jacket. This is achieved by using the right airfoils and by making the transitions and split lines as gradual and smooth as possible. The better you do it, the less energy you lose and the earlier you reach the finish line.